This time, I would like to report the results of DPCSONLINE in Vietnam.

Distribution of the 1st deck 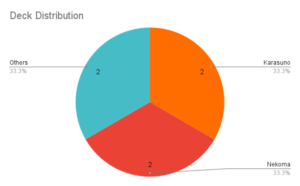 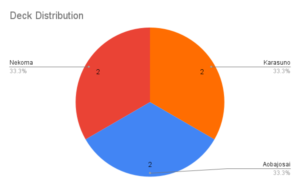 The winning deck this time is Summer Camp Karasuno!

The concept of this deck is to use actions to increase your hand, and use starter HINATA and KAGEYAMA to keep producing 6 points.

This is also a cooperative deck type in HV-06, so please give it a try!

This deck is very difficult to play in HV-06, so I would like to write an article about it somewhere.

There were some problems with the tournament on discord, but I think the most successful point was that we were able to hold it successfully.

Also, I think we were able to run the tournament smoothly by using the Google Form instead of reporting the results on discord.

I’ll do my best to make it a weekly event.

First of all, we were slow in dealing with problems due to language differences.

In addition, I feel that there were inadequacies in our explanations, as the methods that are common in Japan are not common in Vietnam.

I believe that this is one of the reasons why there were so few participants.

We would like to update the explanation to make it easier to understand.

Hello,  this is donkakun. This time, I introduce Aobajosai and Freak Quick Unleashed deck list used in the youtube vi

Hi, this is donkakun. This is an announcement about the Swiss draw tournament to be held in Penguin and Polor Channel

Hello, this is donkakun. This time, I introduce Freak Quick Unleashed and Nekoma deck list used in the youtube video.

Hello,  this is donkakun. This time, I introduce Aobajosai and Whip Nekoma deck list used in the youtube video. Cl